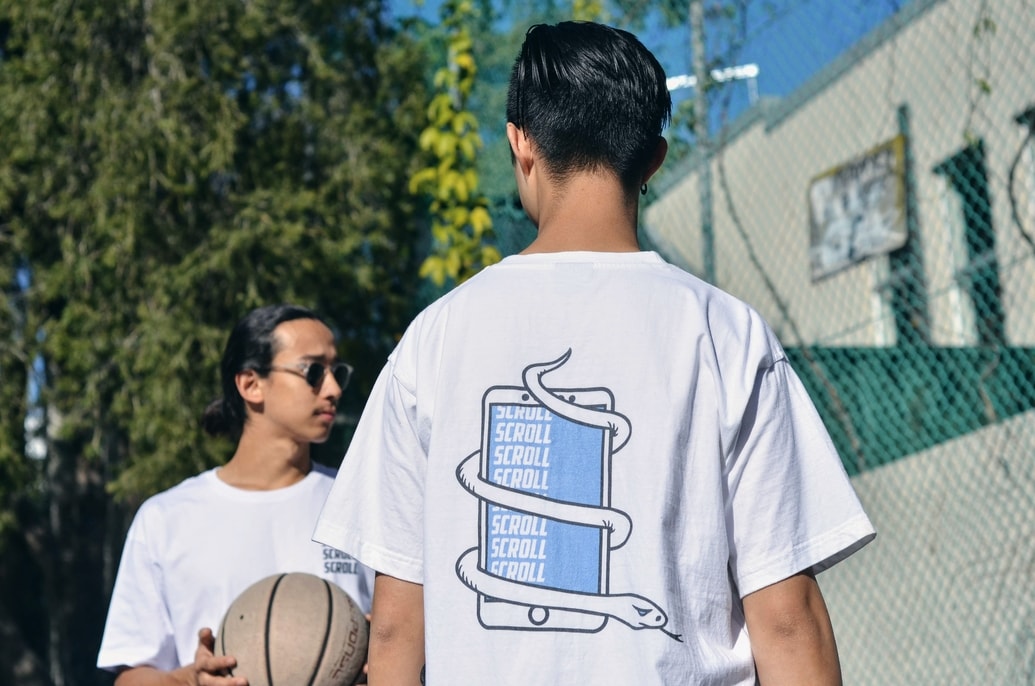 The Infinite Scroll Tee references the web-design technique known as ‘infinite scrolling’, whereby content is loaded continuously as the user scrolls. This is what your news feed is. It’s also what a lot of us get caught up doing on a daily basis - scrolling endlessly for hours on end. Mediakix estimates that the average person could be spending up to five years and four months of their life on social media. Now that’s fucking scary.

Not only is the scrolling happening endlessly, it’s also happening mindlessly. We all know that feeling when you pick up your phone and start browsing. You scroll, and scroll, and scroll. The hours tick by, and when you look up from your screen, the sun’s gone down. Strangely, you’re still not satisfied. In fact, you feel worse than when you started. Why? Because there was nothing you consumed that you could confidently proclaim was of any value. You didn’t learn anything of interest, and the video of that cat slipping off the fence wasn’t actually that funny. Most of your feed is just poor-quality content that stifles any spark of productivity inside you. No amount of mindless scrolling will ever trump the satisfaction of doing something productive.

Perhaps you want to scroll because you need to do something mindless after a busy day. Do something that requires little brain power but doesn’t involve a screen. Try putting on some music, and draw stick figures descending from large to small. Draw shapes within shapes. Throw a tennis ball against the wall. Find a heap of scrap paper, and fold planes for a bit. You can become a master at something trivial without even realising. Even gazing out the window at the world beyond is far more soothing than absorbing a load of lukewarm rubbish. Clear your mind, and lessen the information overload. Life’s already busy enough, so give your brain the breathing space it deserves.

Scroll for a bit if you must, but don’t scroll for a lifetime. Everything in life is about balance. If you catch yourself scrolling mindlessly when you have the energy to do something better, take the higher road. You won’t miss anything important on your feed, I promise. An hour spent consuming useless content is an hour you’ll never get back.